A TASTE OF HONEY!!!!… Guest blog by STIG 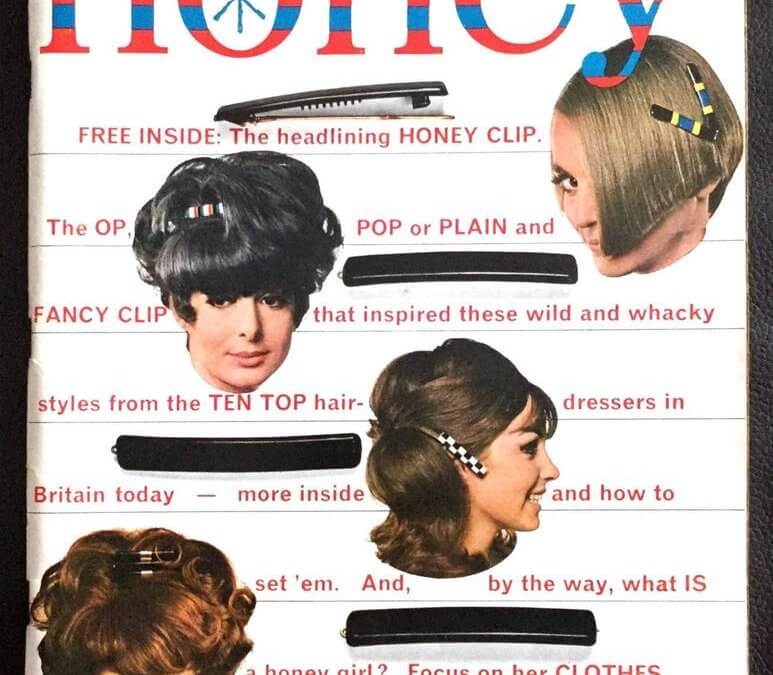 When you have had a consuming interest in a particular aspect of life, it is sometimes hard to remember precisely where it all began!!! And I have, I confess, a passion for style and menswear that belies my upbringing in a mining village in Yorkshire. My grandad was a miner, my beloved late father was a lorry driver and my wonderful mum a care assistant.

So there was certainly no history of sartorial elegance in the family. Clothes were functional and appropriate to the job you did. There was probably a single suit in dad’s wardrobe for ‘special occasions.’

So, if anyone is to blame for starting me on a journey that continues to bring pleasure every single day, it was the dark haired and beguiling girl I was to marry.!!!

In the mid-60’s, when we first met in our local record store, she was an avid reader of a fashion magazine for teenage girls called HONEY. In one particular issue, it devoted an entire editorial spread on ‘How to dress your boyfriend.’

It featured an illustration of a young man in a three piece, chocolate brown suit. And, boy, did he look good!! Until that day I had never even thought of wearing a suit, let alone buying one. Heck, I was in a (not very good) rock band; what did I want with a suit?

However, it fired something inside of me that burns to this day. I had to have it. Together we headed to the local branch of Burtons the tailor, magazine in hand, to select a fabric, be measured up and then wait four weeks before it was ready for collection.

That was more than 50 years ago. I can still picture the image in the magazine. And the personal satisfaction of dressing well has never left me (and neither has my wife!!!!).

“You should dress well everyday, otherwise you get out of the habit.”

It is a mantra I have happily embraced and have adapted based on personal experience.

For many years I worked as a journalist around the world, often turning up on people’s doorsteps in unlikely places and at ungodly hours, hoping they would speak to me about whatever tragic event they had been a part of or had witnessed. On those occasions I quickly learnt that strangers will make a snap decision about you before you have opened your mouth. They would form an instant judgement based on their very first impression. And that impression was formed by the way you looked, presented yourself and the persona you projected. It opened more doors to me that I care to remember.

So, being known as someone who dressed well at all times – I began wearing pocket squares more than four decades ago and still do every day – became my calling card.

I carried the reputation into my business life.

In a competitive profession involving important presentations to groups of strangers with your commercial future in their hands, I believed that if people remembered what you wore when they first met you, then they would probably remember what you said. And if they had spent the day listening to half a dozen pitches, that could be the difference between success and failure!!

I still have clients now who will recall a particular suit or tie I was wearing at that initial meeting.

And I don’t believe that dressing well is all about money. There are people I admire who would look the proverbial ’million dollars’ in a simple, dark blue suit from M&S because of the way they carry themselves; there are others I know that you could put in a Savile Row suit and they would look a shambles.

I do believe a degree of personal vanity is healthy. Why wouldn’t you want to look the best you can? I still find it depressing in a restaurant when I see an attractively dressed woman accompanied by a man who clearly hasn’t made the same degree of effort, usually in ill-fitting jeans with a shirt worn outside his waistband. Why on earth wouldn’t you want to make an effort??

Since, first stumbling across the Rhodes Wood store more than a decade ago, its cornucopia of sartorial temptations has made making that effort a constant delight.

In a world that sometimes seems to get a little crazier and a little more vulgar every day, my personal rebellion against it all is to dress well, be well-mannered and try to do everything with a little style.