A Week and a Day 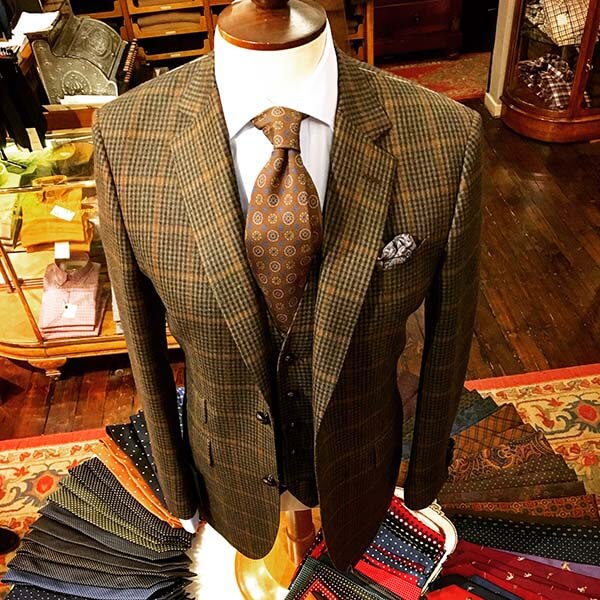 Friday last, I went under the knife… not for any vain cosmetic lifting of jowels and eyelids, but to have a BCC (mild skin cancer) cut out of the side of my forehead.
…OK, I may have told a few people, “that, three ruffians tried to mug me, and I fought them off single handily “….and “that my years of judo, karate, wing chun and other exotic arts were put to the test”… but back in the real world, my little inoffensive spot on the side of my head is gone and a £2 coin size stitched scar proves my bravery with offenders, courtesy of a lovely Sikh doctor.Under his instructions to take it easy, I had a rare Saturday off and enjoyed for once a weekend like normal people who don’t work Saturdays.I enjoyed a trip to Holmes Mill in Clitheroe, a beautiful and sympathetic restoration of a mill into a hotel, dining, shopping experience with a brewery on site and a bar offering 42 hand pulled beers – worth a visit if you are in the area.

Monday, was back to it after Gods day of beloved rest and we started to plan our Summer Sale.
Tuesday I was off to the newly opened and quite magnificent Grantley Hall near Ripon, for a wedding shoot taking place where we had provided the men’s attire.
Grantley Hall by the way has four restaurants and is a must! I attended a pre open evening earlier in the month and enjoyed first hand a tour of the hotel and grounds and sampled many culinary delights and refreshments throughout a very enjoyable evening. The ambiance in the Sean Rankin restaurant and hotel and grounds is LOVELY!Arriving on Tuesday at 11.30 at Grantley Hall after a couple of hours on the shop floor directing my son Charles, I unpacked the outfits into The Royal Suite , (magnificent) and chilled out until called to dress the male models for their photo call.
I can’t say too much yet other than in a couple of months there should be some rather nice footage/press. The working day there drew to a close for me at 8.45 pm with a swift well earned tipple in the bar.
I headed back to the shop to  drop off the outfits and pack for my London visit the next day. Arriving home at 11pm and straight to bed, I apparently snored (impossible in R-W silk pyjamas) all night and rose at 6am to catch the morning train to our London office, armed with fittings and finished garments .After a fierce thunder storm the night before and apparently due to a lightning strike my intended train was running 30 mins late. The office reception texted me that my first client had already arrived as I was just mounting the escalator at Kings Cross to start my two stop journey to Chancery Lane. 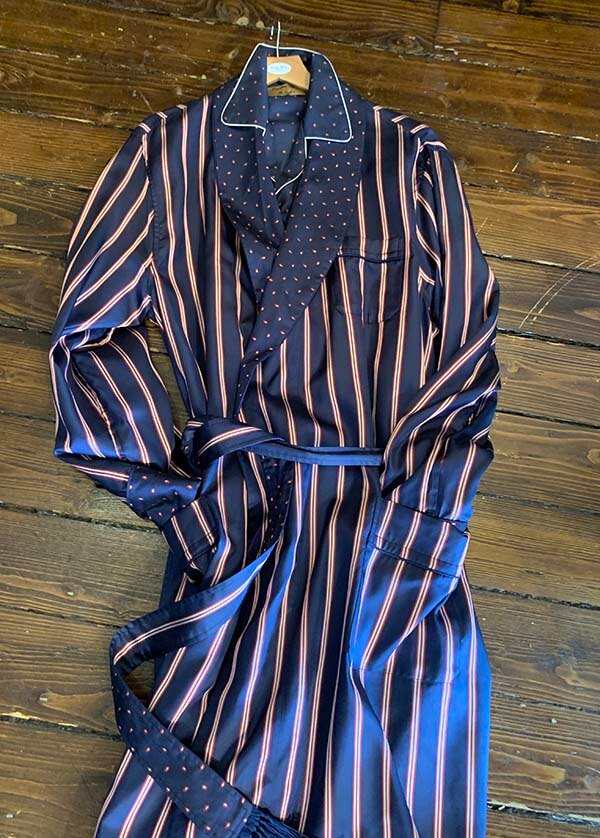 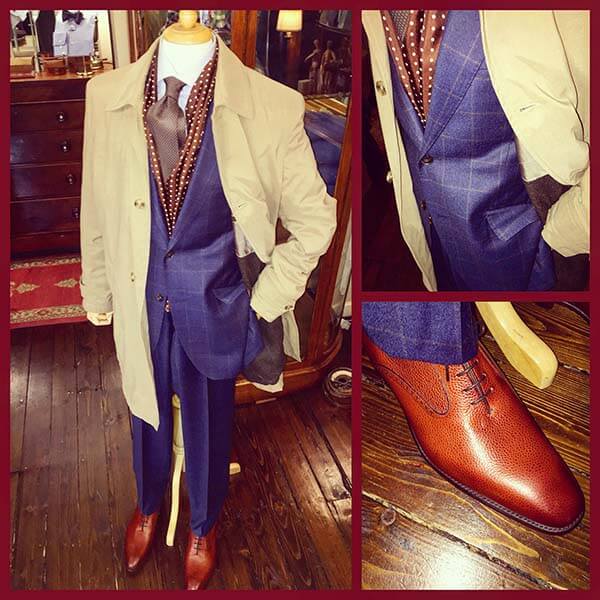 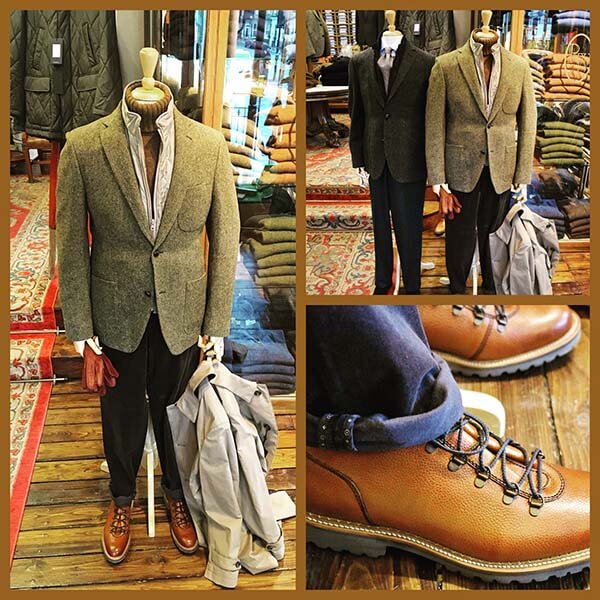 As I entered reception some minutes later, my client a celebrity Dr, (we never say) was relaxing, as chilled as ever.
He is a striking looking man with bags of presence and a gentleman through and through. We first made for him some ten years ago for his wedding and coat a little later, he has kept trim and retained a ‘powerful ‘athletic figure.This coat was commissioned to wear on TV, for the latest show he is on, so colour and a non strobing pattern were important…a nip and a tuck and I will be sending his coat midweek next.My second client from sunny Australia, who also has an apartment here, came with his good lady wife and tried on his new evening coat, which fitted beautifully. As it was their anniversary and they were heading for lunch, I offered to carefully pack and post it, for their return tomorrow, which conveniently coincided with lunch at a very small understated Italian restaurant on Grays Inn Road, near to the ITN studios.
Jon Snow was on the table next to me with some TV people… he’s not a client so I can unashamedly ‘name drop’…and fair play to his tailor… thumbs up!Back to the office to meet a very long standing client and likeable chap, who takes dressing as a very serious pursuit, professionally and privately, to collect his two coats (potatoes wear jackets and gentleman wear coats!)… a lovely chat and catch up about the world of private banks and high commerce and of course clothing and fine cloth… always extremely flattered that this client drives up to Harrogate twice a year to select additions to his wardrobe.
A little break to catch up with emails before my last client from private health to fit his suits and again catch up about his newly born son.We are lucky to have some lovely clients and it is a pleasure to help look after them.I’m seeing a more sensible approach to dress down in London, in that people (the smart ones) are dressing appropriately to their business day and client meetings… ie double cuffs and suits with ties to sports coat and trousers with out a tie dependant on their client relations, and a day in the office or working from home – what they like within ‘reason’.As a result we are making more and more sports coats and ready to wear sales have been excellent… you may even see me in a jacket soon… Oops!… did I just say ‘jacket’?After shaking hands and saying farewells, I turn out the lights, put the key in the lock and contemplate a pint of London lager that is permanently on tap in the refectory ‘fall out’ area which comes complimentary with the office… mmm cold beer and air conditioning or brave 32 degrees of heat and the tube to catch my train home? 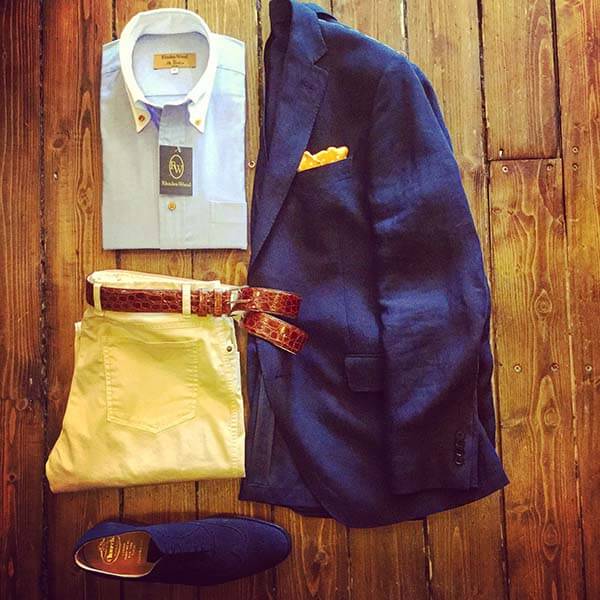 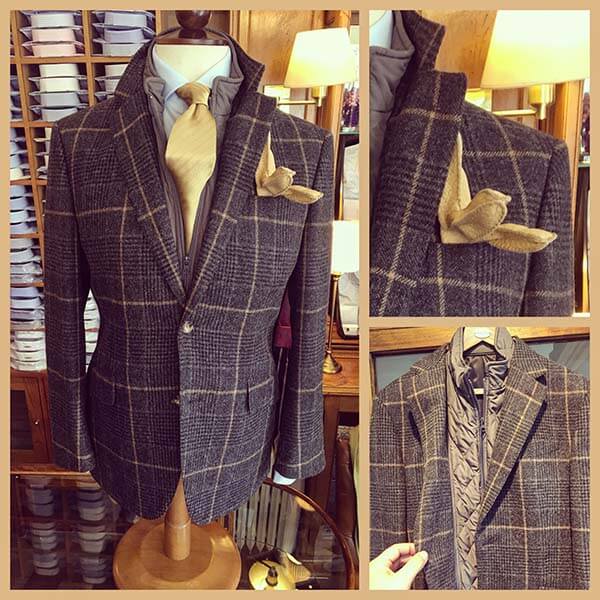 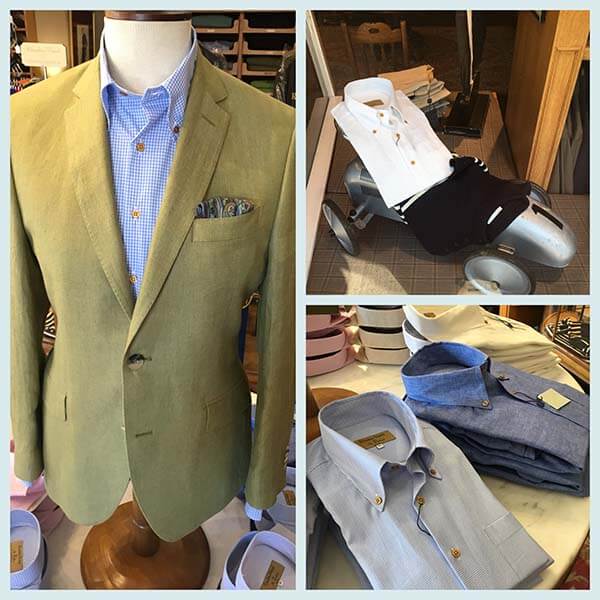 As much as the cold pint of lager called, so did home and I ventured out into the stifling heat passing the odd barrister from Chancery Lane in a three piece suit and stiff wing collar… probably feeling grateful to have removed his wig and gown as he walked by (probably also fixated on a cold pint of lager). London has some great things, but beer isn’t one of them. I make my train and settle back, looking forward to a day off.Home in time for tea and honey, which in modern day ‘Jeremy‘ speak means a glass or two of over chilled champagne (that’s the way I like it) ah hah ah hah (K.C. and The Sunshine Band 1974)… you have to have watched Austin Powers ‘Goldmember’ to understand that… and of course Pizza from dough I managed to make the day before.Thursdays day off was the hottest recorded day in Blighty – 38˚c something = more over chilled champagne and the shade especially with Frankenstein scars from sun damage.Back to work and a manic day preparing our sale and updating our text list, to notify our lovely clients about the sale.Saturday, despite the weather which in contrast to Thursday, rained heavily all day, we were steadily busy all day in our ‘genuine sale’… meaning we don’t buy in for it!
At last home, and the penultimate episode of Stranger things, watched through one eye…..zzzzzzzAnother day of rest with Sunday having come around so quickly… a quick visit to the most wonderful Red Brick Mill in Batley.. a fabulous set up and a must visit, if you haven’t been.And… breathe… and… sleep!“Time for bed” said Zebedee.